The season of Epiphany is all about the journey - it is a time when we get to Walk with Jesus and learn from him how it is to be a disciple.

It is a season of encouragement, wonder and risk taking with one goal: building up the kingdom of God!

My favorite vacation location is near a body of water - be it a stream, lake, river, sea, or ocean. I think it is because it gives me a feeling of happiness and a sense of well-being. Therefore, it is not difficult to imagine my heightened emotions while on a boat ride on the Sea of Galilee - the very place where Jesus traveled - with my fellow brothers and sisters in Christ. The pilgrimage journey was life-transforming with the ability to experience the sacred sites with all my senses had made my reading of Scripture more profound. 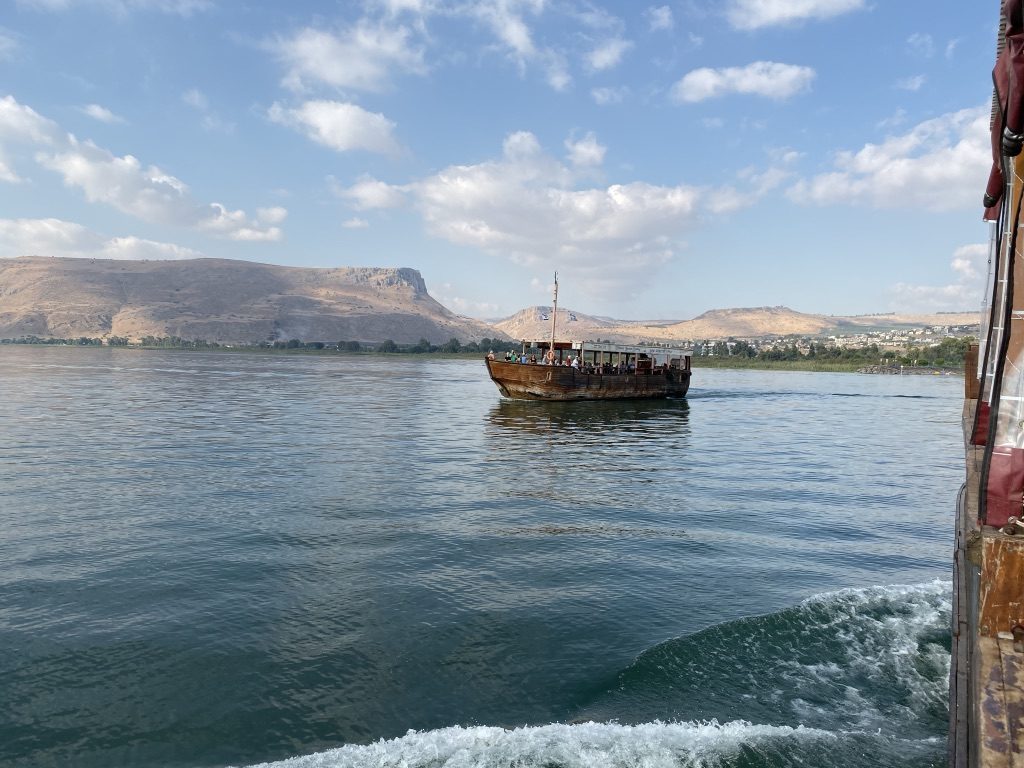 The Lake of Galilee (called the Sea of Galilee, according to tradition) was a place of much commercial traffic due to its location surrounded by other small villages, e.g., Nazareth, Capernaum, Bethsaida, Magdala, and Tiberias. I imagined the area being a popular health destination for sick people coming to the local sulfur springs in the area. The area became a thriving fishing industry, and it was the place of Jesus' miracles where he walked on water, calmed the storm, as well as feeding the multitudes on the hillside of Tabgha, Capernaum.

Galilee is one of the most significant regions in our Christian history and pilgrimage sites because it was where Jesus began his public ministry. It is where Jesus first called two local fishermen, Simon called Peter and his brother Andrew, then James and John to leave their nets and family and 'follow' him in ministry. 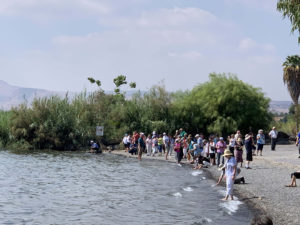 Their lives will never be the same again after they left everything to follow Jesus. No longer will they catch fish but people. I would imagine that it was difficult for Jesus followers to leave the comfort of homes, familiar places, and family behind to go on the road. But this is what they did. By faithfully following Jesus, they witnessed the miraculous healings of the sick and all who were bound in spirit, soul, or body. They received forgiveness and wholeness rather than temporary healing.

We, as modern-day disciples and followers of Jesus, are also called to faithfully follow Jesus in sharing the Good News of the Gospel to a world that is in darkness spoken in Isaiah 9. That light of God Incarnate in Jesus came to forgive sin and restore all damaged areas in life. As we celebrate this season of Epiphany, let us share and point to the manifestation of God to a hurting world. That is how we would transform the world one person at a time.

Prayer: God of love and light empower us to share your grace, compassion, and peace to all so that they would know that you are the same yesterday, today, and forever. Amen


Matthew 4 says “Jesus made his home in Capernaum” as he began his iterant ministry. It was one of the places we visited in Israel.  At the time of Jesus, Capernaum was a fishing town of 5-6,000 people on the northern end of the Sea of Galilee. Located on the major trade route between Egypt and Damascus, it was a border station for travelers and traders from the Gentile territory on the east of the Sea of Galilee ruled by Herod Philip and the largely Jewish territory west of the Sea of Galilee of Herod Antipas.  It was important enough to house a Roman garrison, and a tax/custom office, but poor enough that a Roman centurion was needed to build the synagogue.  It was much more cosmopolitan than Nazareth where Jesus had lived before his baptism.

For Matthew, the relocation of Jesus was a fulfillment of the prophet Isaiah chapter 9 where even Gentiles in faraway places will see “a great light.” Just as God had done something new and unexpected in the birth of the Messiah in a manger, so now would Jesus do something new and unexpected by making his home in a cross roads town that included Gentiles and those considered outside the religious boundaries.  But Jesus was always crossing boundaries and being “light.”

Like a pastor in a new appointment, Jesus set to work.  He preached inspiring sermons in the local synagogue even as one outside the established priestly circles. He called local fishermen who couldn’t keep all the Jewish laws his first disciples, Peter, Andrew, James, and John, and later a despised local tax collector.  Jesus also healed a variety of persons, some who were deemed unworthy:  a man with a demonic spirit, a paralytic, Peter’s mother-in-law, and the local Centurion’s servant, as well as countless others. He taught, called, and healed with a different kind of authority than the scribes.  Many experienced something in him they had never experienced before.  Yet, many never saw “the light” that was in him, and in Matthew 11 it is recorded that Jesus felt rejected by the town.

Often we do not see “the light” that is in our midst.  As I write this in November, there is another mass shooting, the impeachment hearings are underway, West Virginia finds itself in a budget crisis once again, the mass exodus from southern West Virginia continues, some of our churches and pastors are really struggling in the midst of rapid change, another friend faces the agony of a divorce, a parent’s heart is broken over a child with an terrible illness, and a senior citizen faces crumbling health. Sometimes we are so overwhelmed, we can’t “see the trees for the forest” to reverse an old saying.  But, maybe we are looking at the darkness instead of the “light” that is in our midst:  the neighbor who greets you with a smile, friends from unexpected places, a challenge that becomes an opportunity, a text from a long lost friend, some quiet time to read scripture anew, the beauty of a pink sunset, the unexpected Christmas card, or clasp of a friend’s hand.

During this season of Epiphany, be aware of the light that is around you, just as Matthew tells us.  The light came as a person, far away from those deemed important, but into that world to those who had eyes and hearts to see, “light has dawned.” May that light dawn on you as well.  May you have eyes to see when others may not.

From our hotel window in Tiberias, I looked down on the evening shore of the lake at Galilee. An empty swimming pool below offered promise of frolicking swimmers when sun warms the water. Across the parking lot, palm trees reflected on the serene lake and a lone boat floated untended at a distance. The moon peeked over the far shore and I thought of biblical stories that brought to life the message and character of Jesus. 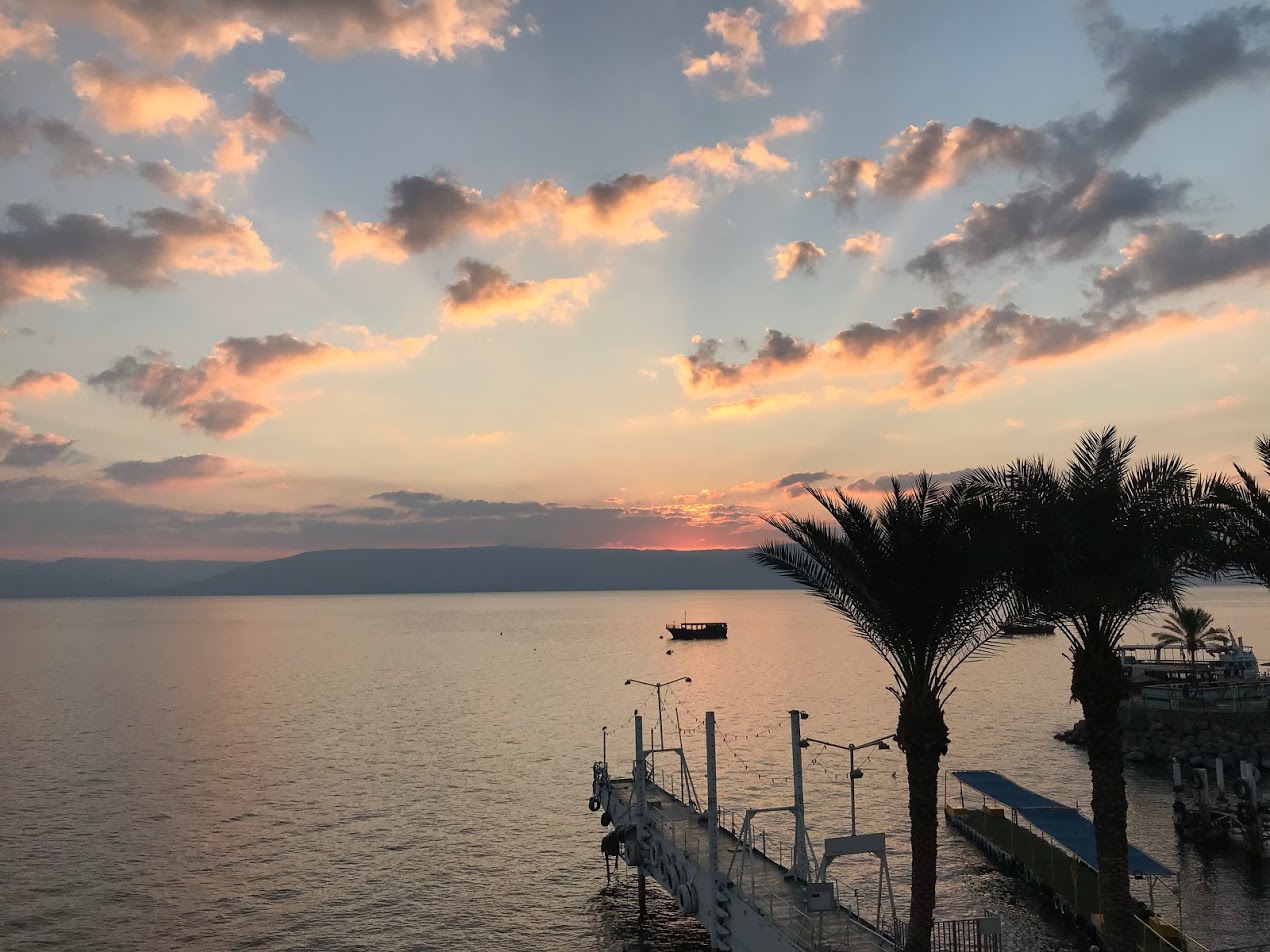 Perhaps I looked at the very place where he fed 5,000 men and even gathered the leftovers for another meal. Thus started our visit to the area familiar to Jesus and his friends as he grew to adulthood.

Early morning found our Orange Bus group hustling toward a tethered boat that was much like the one used by first century fishermen. We claimed seats on deck chairs as the boat filled. In no time we were full and deckhands tethered another boat to ours, accommodating the entire traveling group from West Virginia.

Together we moved to float in the center of the lake like that lone boat I saw last evening; and I was glad. I was glad to hear repeated the familiar lake and water stories from the four gospels. I was glad to sing songs with uplifting memories come to life on this water. 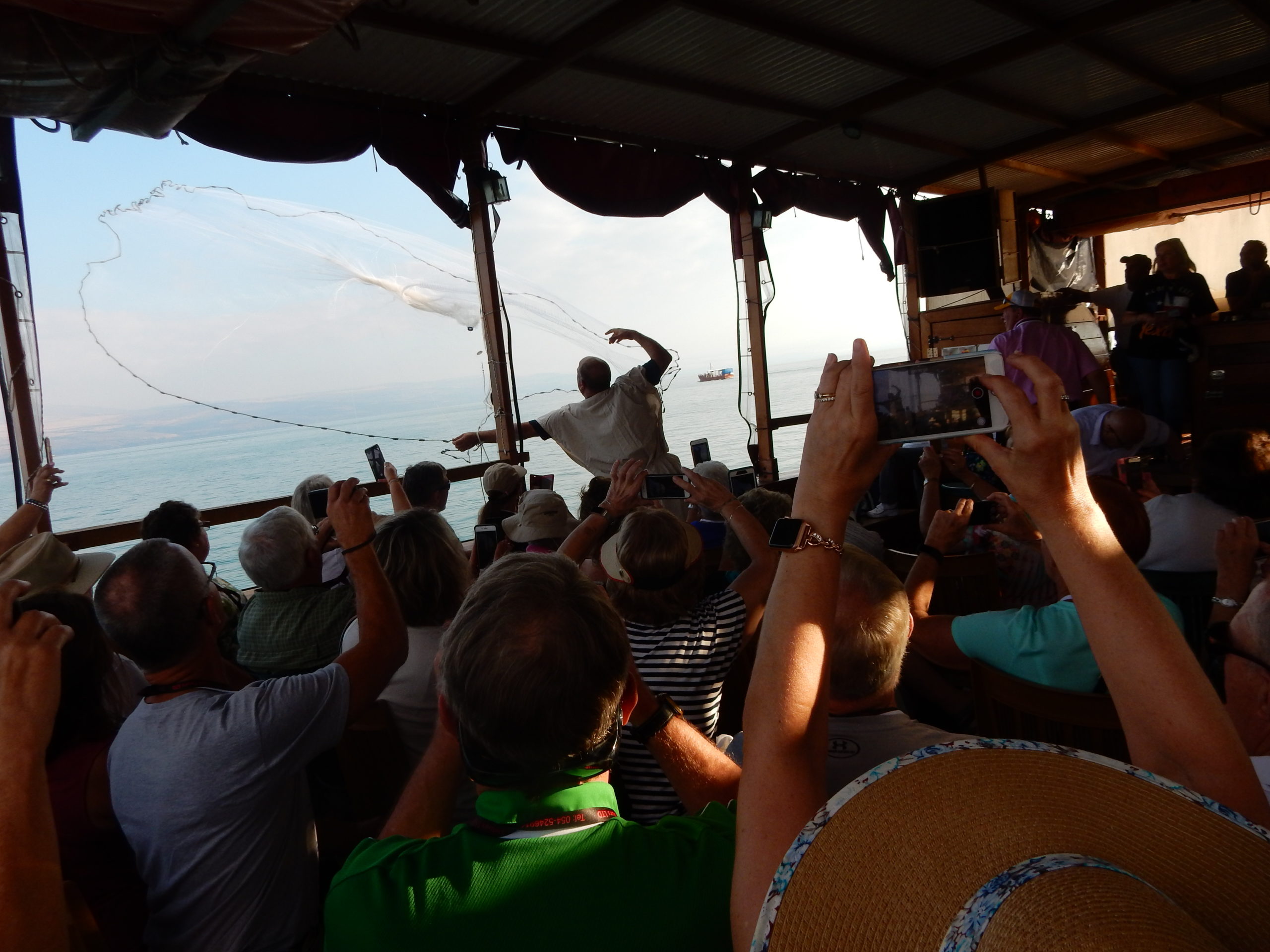 I was glad to see the fisherman show net casting that might have brought in a great haul of fish. But it didn’t; and it was fun to laugh and suppose that we may have missed our lunch.

Most of all, I was glad to be given the gift of time to sit wordlessly with my uninterrupted thoughts to remember Jesus in this Galilee setting. I imagined him chasing along the seashore with young friends, visiting the synagogue with family, eating fish fresh from this water. I remembered how this unpredictable deep lake can at a moment’s notice turn from glassy surfaced to deep wave squall torn. Like Jesus’ life and ours, preparing for unpredictable changes requires a close walk with God in faith and trust. And tears came.

And then we danced. How lovely to move the chairs away, grasp hands with fellow worshipers and sing and dance to the rousing tune of Hava Nagaela. We pilgrims had reason to celebrate our experience and worship our Lord with glee!