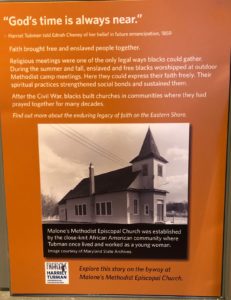 Last week I attended a meeting in Maryland. One day we took a field trip to the Harriet Tubman Underground Railroad visitors center. (You can find it online HERE) The center is an amazing experience I would highly recommend to everyone. Here is a quote from the center:

Harriet Tubman was a deeply spiritual woman who lived her ideals and dedicated her life to freedom. She is the Underground Railroad’s best-known conductor and before the Civil War repeatedly risked her life to guide nearly 70 enslaved people north to new lives of freedom.

While the Underground Railroad was not really a railroad, it did employ some of the same terms. For example, the safehouses where enslaved people could find food and shelter along the way were referred to as “stations.” These stations very literally saved people’s lives on their road to freedom. A few of the stations we learned about during the tour were Methodist churches!

This reminded me of the Parable of the Life-Saving Station. The original author of this parable is unknown. One version is shown below, and you can find a short video of the parable on YouTube.

On a dangerous seacoast where shipwrecks often occur there was once a crude little life saving station.

The building was no more than a hut. There was only one boat. But the few devoted members kept a constant watch over sea. With little or no thought for themselves they went out day and night tirelessly searching for the lost.

Some of those who were saved and various others in the surrounding areas wanted to become associated with the station and give their time and money and effort to support the work. New boats were brought in and new crews were trained. The little life-saving station grew.

Some of these new members of the life saving station were unhappy that the building was so crude and poorly equipped. They felt that a more comfortable place should be provided as a first refuge to those who were saved from the sea. They replaced the emergency cots with beds and put better furniture in the enlarged building. The life-saving station became a popular gathering place for its members, and they began to use it sort of as a club.

Fewer members were now interested in going to sea on life saving missions, so they hired lifeboat crews to do this work. The life-saving motif still prevailed in the club’s décor, and there was a memorial lifeboat in the room where the club initiations were held.

About this time a large ship was wrecked off the coast. Hired crews brought in boatloads of cold, wet, half-drowned people. They were dirty and sick, and some of them were foreigners. The beautiful new club was in chaos. Immediately the property committee hired someone to rig up a shower outside the club where victims of the shipwreck could get cleaned up before coming inside. The outsiders made the Life Saving Station extremely dirty.

At the next meeting there was a split in the club membership. Most of the members wanted to stop the club’s life-saving activities because they felt there were unpleasant and a hinderance to the normal social life of the club. But a small number of members insisted upon life-saving as their primary mission and pointed out that they were still called a Life Saving Station after all. The dissenting members were voted down and told that if they wanted to save lives they could begin their own life-saving station down the coast. So they did.

As the years went by however, the new station experienced the same changes that occurred in the old station. It evolved into a club, and yet another life-saving station was founded. History continued to repeat itself. And if you visit that eastern seacoast today you will find a number of exclusive clubs along that shore.

Shipwrecks are still frequent in those waters. But most of the passengers drown.

To state what I hope is obvious at this point, our churches are life-saving stations.

Our mission is to save the lost. It means leaving our comfort zone and going out to where people are who need saving, not waiting for them to come to us. It means they will create a mess when they come to our churches because they will not know our ways, or even our language. Most of all, it means we need to value the ONE at least a little more than the ninety-nine. (see Luke 15:3-7)

Do you have a strong desire to have your church become the best “Life-Saving Station” it can be? Here are three great places to start:

There is no “plan B.” We are God’s plan to reach and save the lost. But we are never alone on the journey! God is with us, and wants us to be fruitful in our efforts. You can do it!