Bishop Sandra pauses at the birthplace of Jesus in Bethlehem.

It is in the season of Epiphany that Jesus is made known in many exciting ways! This is when our Walk with Jesus becomes a journey of light, hope and on occasion one of taking risks for the Kingdom of God.

The scripture lessons for Epiphany Sunday are:

Since I was a young boy, I have absolutely loved archaeology; the idea of unearthing ancient buried secrets that must be carefully handled, studied, and deciphered has always sparked my wonder and excitement.  Throughout our time in the Holy Land, both in Israel and Palestine, everywhere we turned, we found ourselves in the midst of an archaeological wonderland, and of all the sites, the most grandiose were those built by Herod the Great.  While Herod may seem like a common figure in the New Testament, there are actually two different Herods, and today’s reading is about Herod the Great as he is trying to trick the Magi into revealing the location of the Christ Child so that he might slaughter the young messiah (the other Herod is Herod Antipas, son of Herod the Great, king of the Jews during Jesus’ adult ministry). 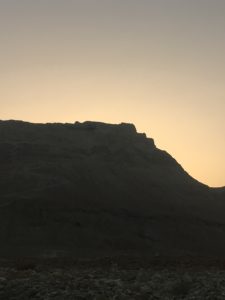 As far as archaeology in the Holy Land goes, Herod the Great is everywhere.  Whether you are next to the Dead Sea, in Bethlehem, or in the heart of Jerusalem – you can literally see monuments built by Herod the Great: Masada, Herodium, and the remnants of the second Temple. With the exception of his ostentatious second temple renovations, the other two monuments were built for Herod’s pleasure or his glory. At Masada, an absolutely fascinating engineering marvel, Herod built a luxurious palace overlooking the Dead Sea, the hottest place on earth, where life barely survives. Herodium is a man-made mountain that Herod built with slave labor and other skilled workers; it served as a fortress, acropolis, town, and later his own tomb. 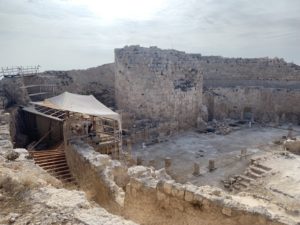 For all the ancient grandeur that these monuments symbolized, I find it absolutely ironic that these sites are just now being rediscovered through modern archaeology.  It is ironic because Herod wanted power at any cost and sought to be remembered (he went so far as to kill several of his children so that no one could question his power), and yet his pretentious monuments have been deserted, broken, forgotten, left to rot, and covered with centuries of dust, dirt, and debris.

The view from Herodium.

For all his effort to make himself great, he became a barbarian, slaughtering innocents to maintain his control - even Caesar Augustus said it is safer to be Herod’s dog than his son. Yet in his endless grasp for power and his hope to be remembered, he has been forgotten, or worse, only remembered for the awful sins he committed.

While Herod has been relegated to infamy, the Christ child he sought to murder lived a life of perfect servanthood and has been raised up to the highest glory.  Like the ancient hymn found in Philippians 2 expresses so eloquently:

“…though he was in the form of God,
did not regard equality with God
as something to be exploited,
but emptied himself,
taking the form of a slave,
being born in human likeness.

And being found in human form,
he humbled himself
and became obedient to the point of death -
even death on a cross.”

As followers of Christ, it is in emptying of one’s self, that we come to understand what true glory is. This goes against the broken tenants of the world that praise ego, honor winners, and emphasize might.  Instead, in the perfect servanthood of Christ, we understand what eternal glory truly is.  While Herod sought eternal glory in the building of long-forgotten monuments, we, as Christians, realize how fruitless this self-aggrandizing endeavor truly is.

Perhaps this is what Christ meant when he said the last shall be first, and the first shall be last.

"The Word took on flesh and bones and moved into the neighborhood.” I’ve always loved Eugene Peterson’s description of the incarnation in The Message paraphrase of John 1.

The idea of the fullness of Love, the creative force of the cosmos, being embodied in the person of Jesus of Nazareth to put a face—and flesh and bones—on the God of the universe. If I took one thing away from walking in the footsteps of Jesus in the Holy Land, it was that sense of embodiment.

We were heading to Bethlehem on the Palestinian bus.   The afternoon was hot.  Most of the riders were coming home from work and looked tired.   There was not much conversation on the bus until we came to a stop.  As an elderly woman was getting off the bus, she turned as if to address anyone who would listen.  I had no idea what she said in her Arabic language, but immediately a young woman dressed in her business suit attire stood up, reached her own bottle of water to the woman who then took a drink, gave back the bottle and said what was probably "thank you."   As the elderly woman started to leave, the driver stopped her, immediately opened the glove compartment, pulled out his lunch pail, opened it up and handed her his water.   She smiled and again must have said "thank you."   As she left, the driver's friend reached over and patted him on the back to celebrate this act of kindness.

When I left the bus later I turned to him, signaling to my eyes, the glove compartment and my heart I said "I saw what you did.  So very kind."  He turned and shook my hand with this wonderful firmness.  Some times no interpreter is needed.

It is the Holy Spirit that intervenes on our behalf.  It is the love of God that offers a cup of water to one in need.  I wondered later that day when he would become thirsty, would he in that moment remember the joy of giving away his water to this one who was in need.

Thanks be to God for every opportunity to see love of neighbor lived out in the most ordinary and extraordinary moments.   This is what I remember now when I sing "O Little Town of Bethlehem."  That moment so sacred on a warm afternoon some 2000 years after the birth of Jesus.

Thanks be to God for these Epiphanies!