Easter is more than just a day. It is a 50-day season that marks the resurrection of Jesus Christ and the ways we live into that reality, just as his disciples did.

Matthew’s account of Mary Magdalene and the other women approaching the tomb where they had seen Jesus laid, only three days earlier, is full of majesty and wonder. I imagine the women to be softly talking to one another as they reflect on what Jesus had taught them and about the task at hand. The surprise it must have been to hear that thunderclap as you are preoccupied with your thoughts. Appearing before them an angel that caused the guards to faint, speaking to them of peace and hope. “Jesus isn’t here. He has raised just like He told you he would. Come and see.” The angel then sent the women to tell the other disciples what they had seen and heard.

As the women were heading to tell the others, Jesus appears before them. The women fall at Jesus’ feet and worship. Jesus tells the to go tell the others go to Galilee they will see me there. The fear, the joy, overwhelming. Their aching hearts made new and whole as they looked upon the face of Jesus. They did as Jesus said, they went to the others and told them what they had heard and seen.

Mary Magdalene has always been one of my favorite women in scripture.  She was one of the women Jesus healed and she supported Jesus’ ministry. I guess it seem to me that wherever Jesus was Mary was there too. She was present at His crucifixion and burial. Now Matthew is telling us she was at His resurrection. She followed Him faithfully.

During our experience in Israel we visited the excavation sight of Magdala, Mary’s hometown. As we walked around the sight, seeing the location of the synagogue that Jesus had likely shared the Good News, the ritual bath sights I could imagine the hustle and bustle of the daily life in this fishing town. Seeing first century streets made the picture clearer, Mary met Jesus here. 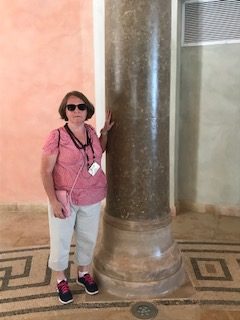 At Magdala there is a chapel honoring Mary and the other women who followed Jesus. As you enter the church there is a baptismal font surrounded by eight pillars. Seven of them represent women in the bible who followed Jesus. The eight was very powerful, it is to honor women of faith across all time. The walls were covered with murals that depicted the life and ministry of Jesus.

There were a few ‘chapels’ with the church. But the one that caught my attention was on the lower level. The floor in this chapel dated back to the time of Jesus. In this chapel were stone carved seats along walls of the circular room, an altar, and a mural. The mural depicted the woman with the issue of blood reaching out to touch His garment. The image still floods my mind. The hem of His garment can change a life. 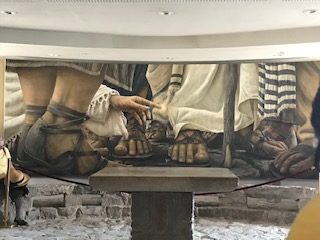 The women of Matthew 28:1-10, in the middle of, perhaps, their ordinary were called out for another purpose. Instead of going to prepare for death, they were called to share life, the Good News that Jesus had been raised. Even in our own ordinary we are called out to share the Good News, through fear, joy or whatever state we find ourselves. May God richly bless each of you. Amen.

Prayer: Holy and loving God it is through the resurrection of your Son that we can receive Your grace. Help us to know that wherever we may be Your grace is for all who will believe. Give us strength and courage to live as you have called us to live, to be witnesses to the Good News. It is through our Lord Jesus Christ we pray, Amen.

But Mary stood weeping outside the tomb. As she wept, she bent over to look into the tomb; and she saw two angels in white, sitting where the body of Jesus had been lying, one at the head and the other at the feet. They said to her, “Woman, why are you weeping?” She said to them, “They have taken away my Lord, and I do not know where they have laid him.” When she had said this, she turned around and saw Jesus standing there, but she did not know that it was Jesus. Jesus said to her, “Woman, why are you weeping? Whom are you looking for?”

Supposing him to be the gardener, she said to him, “Sir, if you have carried him away, tell me where you have laid him, and I will take him away.” Jesus said to her, “Mary!” She turned and said to him in Hebrew, “Rabbouni!” (which means Teacher). Jesus said to her, “Do not hold on to me, because I have not yet ascended to the Father. But go to my brothers and say to them, ‘I am ascending to my Father and your Father, to my God and your God.’ ” Mary Magdalene went and announced to the disciples, “I have seen the Lord”; and she told them that he had said these things to her. 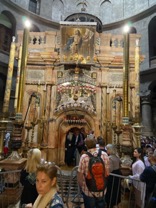 Thousands of people come to Jerusalem each year to see the Church of the Holy Sepulcher and to walk around the Garden Tomb.  At those places we worship, and kneel, and reflect, and marvel at the wondrous things that God has done.  By the power of God, sin has been defeated and the very doors of hell and death have been opened forever.  It is no wonder that we name these places as holy and count them as one of the most important places in our spiritual journey.

What we need to make sure that we don’t miss is one little word that is present in the middle of the resurrection story.  GO.

Don’t just come to the grave and celebrate it is open.
GO.
Go and live like Jesus lived.
Go and love like Jesus loved.
Go. And in going find the Christ who has gone before you.