This week our journey continues with John the Baptist - a voice crying out in the wilderness - along the Jordan River.

Many of us on the  Holy Land trip commented on the dry and desolate landscape which was more rugged that we anticipated. Common questions were , “ How did people survive here in the days of Jesus ?” and “ How did they find food and water ?”. We realized that just surviving day to day must have consumed their time and their lives.

Yet, in Matthew 3 we hear that people of Jerusalem, Judea and the region around the Jordan went to the River Jordan to be baptized by John, confessing their sins. John was not a well-known prophet or preacher - he probably was a  wild looking man dressed in camel’s hair with a leather belt and living on locusts and wild honey. What made these people step away from the demands of day to day survival to travel over hot , arid land to be baptized by this man they did not know ?  I asked myself whether I would have risked that trip . Would I have confessed my sins and been baptized by this unknown man of the desert?

More than idle curiosity drove the people of Jerusalem, Judea and the region around the Jordan to walk many miles to confess and be baptized by John. Clearly, it was the power and presence of God which convicted them to set aside day to day needs and concerns and make that difficult journey to the Jordan River. What difficult journey is God asking each of us to make ? Are we so wrapped up in our day to day life that we don’t hear God’s guidance and will for us ? How can be we be better attuned to the presence and power of God so that we can discern where God is leading us ?

Further, the Gospel of Matthew tells us that John the Baptizer was the fulfillment of the words of the prophet Isaiah that there would be a voice of one crying in the wilderness to prepare the way of the Lord and make his path straight . It appears that even in the days of Isaiah, there was a focus on discipleship !  How can each of us prepare the way of the Lord in today’s society ? How can we remove barriers and excuses that prevent us from crying out into the darkness of the world to proclaim the good news and great joy of Jesus Christ ?

May we reflect on and pray about these questions during this Advent Season and beyond.

Romans 15: 4-13 “So, then, welcome one another as Christ welcomed you, that God may be praised.  What I mean is this – Christ became a servant of the Jewish race and way of life for the sake of God’s truth, not only to guarantee the promises which the fathers received, but also that the Gentiles should praise God for his mercy..”

In this scripture the Apostle Paul is speaking of inclusivity amongst the followers of “The Way” the precursor to the church.  His message to Jews and Gentiles alike is to have one united body in fellowship and worship.  He was asking his followers to build one another up meeting the needs of each brother as they have capability.  To root his message in scriptures that Jews would understand he tied his words to the Old Testament books of Deuteronomy, Psalms and Isaiah explaining that Jesus Christ came to the world to save all people.  So no matter their differences, the church should be welcoming to everyone.

What about those who do not become Christian? What should our relationship be to them?  Should we wall them off from ourselves and other Christians? 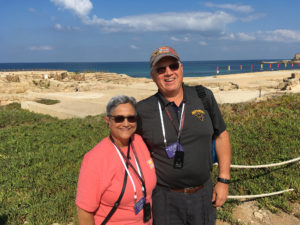 Being my first transcontinental trip, my wife, Carmen and I weren’t quite sure what to expect.  We weren’t anxious but very excited.  We did however have every confidence that Bishop Sandra would plan a well thought out experience and that she and her team would give us a unique opportunity to grow in our faith in this once in a lifetime event.  We were not disappointed!

Being an engineer for highway contractors most of my life I never had the opportunity to get to know many people in my work or personal life that were not Christian.  Presently, as a roadway designer and project manager for the West Virginia Division of Highways I have had the opportunity to build close relationships with many Muslim Americans.

Since 2008 my Muslim friends have gone out of their way to train this builder of roads in the design disciplines. Often stopping what they were doing to as we say “bring a brother along.”  On many trips across West Virginia over the past 12 years we have shared our life experiences as well as our faith journeys.  The stories I have heard from my friends who grew up in countries without religious freedom, Palestine and Syria were eye opening to me.

My Palestinian friend Dirar explained to me how when he was a young boy he watched as Israeli soldiers mowed down his father’s olive trees which were a source of family income to make way for forced Israeli settlements.  I saw the exact same story on video at the “Walled Off Hotel” in Bethlehem. 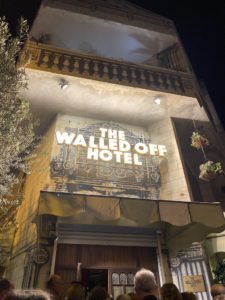 The “Walled Off Hotel” is a hotel/museum in the heart of occupied Bethlehem that advertises the worst view of any hotel in the world.

The view is a graffiti strewn separation wall built by the Israeli Government to keep Palestinian Christians and Muslims apart from the vastly predominant Jewish population.

By our estimation the hotel/museum presents a peaceful protest for the thousands of daily visitors who witness examples of the takeover and occupation.  These art displays and remnants of their former life are constant reminder to Palestinians of who’s out and who’s in.  As one exhibit displayed in a small suitcase filled with a few items and captioned, “What would you take if you were told to be out of your home in five minutes!”

The contrast to other sites in occupied Bethlehem, holy sites including the Church the Nativity, the legendary birthplace of Jesus and the Shepherd’s Field where the Angels of the Lord brought glad tidings of great joy to shepherds watching their flocks was disconcerting to my faith.

Another experience in occupied Bethlehem that we will never forget was the small dinner party hosted by a Palestinian Christian family for five folks from our group.  Our host family not only picked us up at the hotel but opened their home and shared their beautiful family to our group for the evening.  This could have been a working class family in any town in West Virginia.

It was very reminiscent to me of visits Carmen and I made to her parent’s retirement home in a Hialeah, Florida.  Both Palestinian and Cuban cultures are very family oriented.  The husband owned and operated a restaurant while his wife managed the home.  His son who worked at the restaurant was building an attached wing to the house for his family as was customary in Palestinian culture.  The thought was that grandmother would help with the child care with the understanding that the son and his family would care for his parents in later years.  There was also a daughter visiting from a nearby home who was a working Mom whose husband was a Bethlehem police officer. There was also a younger daughter who lived in her parents’ home who was finishing law school.

The family explained that our experience moving through checkpoints earlier in the morning in our visit to the Dead Sea area was much different than their experience through checkpoints.  First, they were not citizens of Israel, or of any country but were living in Beit Sahour, a small village in occupied Bethlehem with residency status issued by the Israeli Government.  It was rare for them to travel out of occupation into unoccupied Bethlehem as it took months for them acquire a permit and the experience through the checkpoint was often humiliating and scary for them and their children. In many ways they were prisoners in their own town although the family was much too gracious to admit it.  They did however admit there were no easy solutions.

Galatians 6:10 “Don’t get tired of doing the right thing, for, when the proper time comes, we will reap so long as we don’t relax our efforts.  So, then as we have opportunity let us do good to all men especially unto them of the household of faith.”

Carmen and her family fled Cuba in 1962 and her father escaped 9 months later to leave Castro’s oppressive regime to begin a new life in America.  She knew what it was like to be different. She understood living in a foreign country not speaking the language and living on government assistance. When I was a younger man Carmen would tell you, I had a fear of people who practiced other religions and those of a different sexual orientation than mine. It was not until I became personal friends with folks who were different than me that my barriers began to come down.  When I began to work beside them on mission projects, youth events, church choirs and committees the cracks in the barriers began to form. I have no doubt that God’s love broke through those cracks and gave me eyes to see and ears to hear.

What an awesome experience this has been!!  Even in the short time we have been back home Carmen and I are seeing the great bible stories come to life as we connect with the experience of being there.

May God continue to break our hearts, just a little so we can see what breaks God’s Heart.