and a call to all to learn about,
respect, and celebrate
the gifts of our black sisters and brothers. 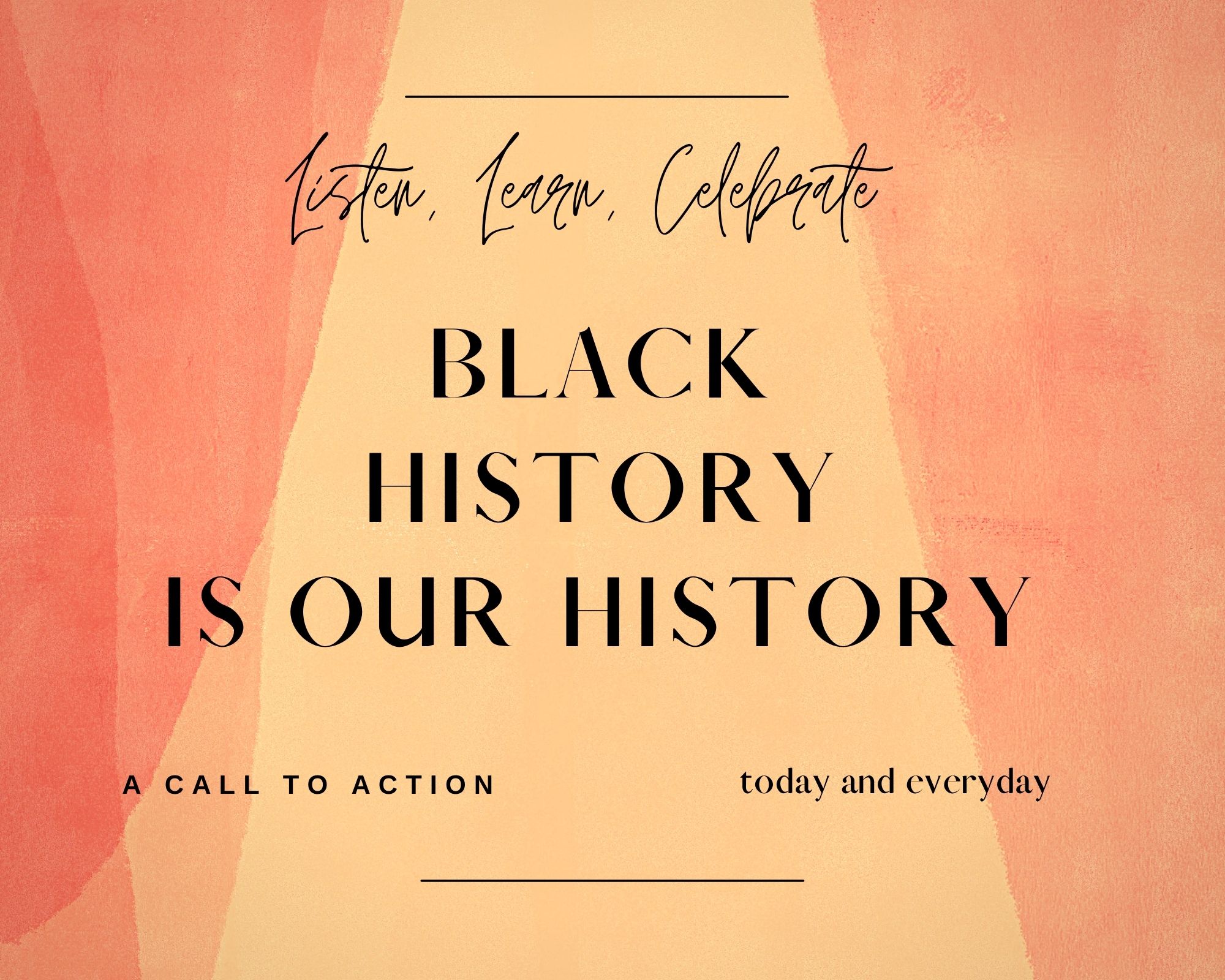 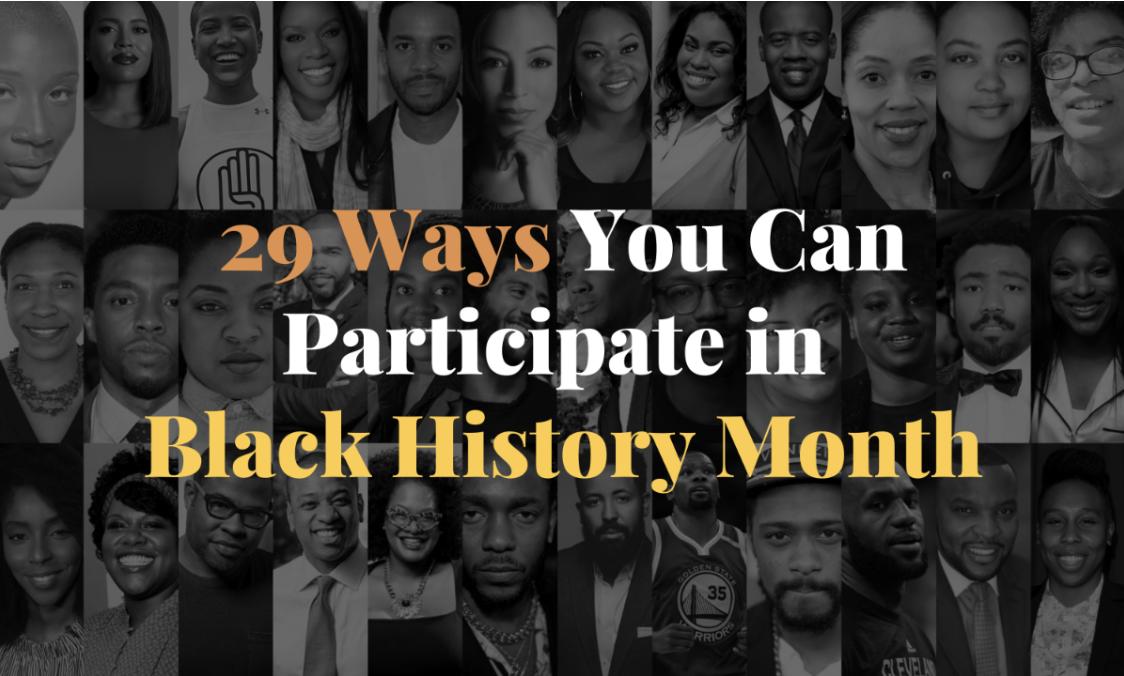 Some helpful and practical suggestions from our friends at the General Commission on Religion and Race. 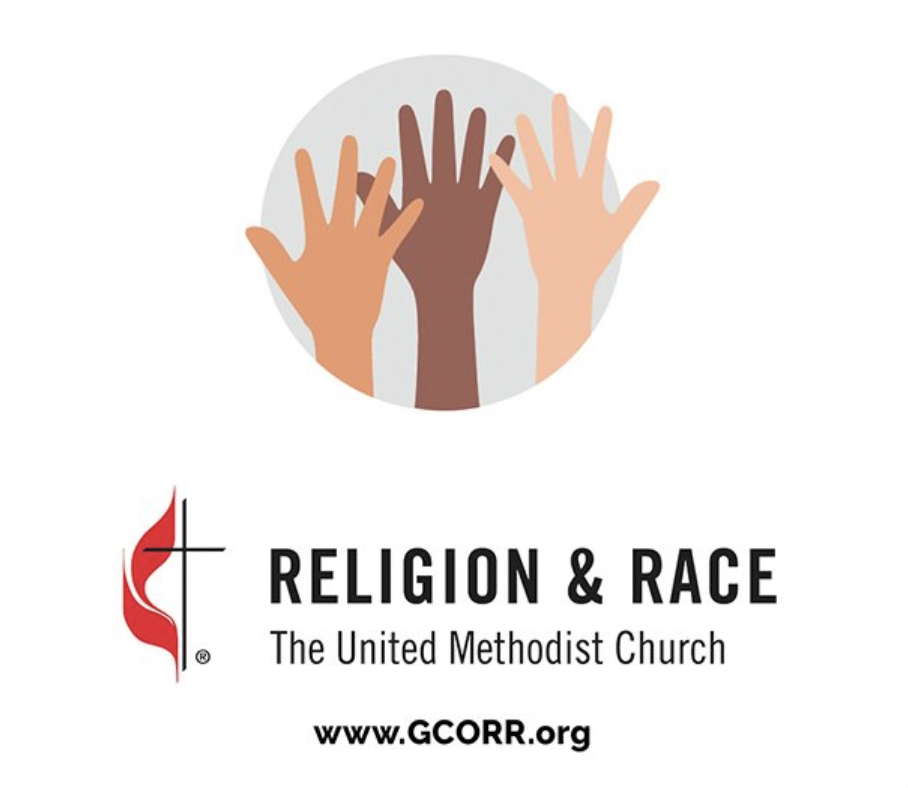 GCORR reached out to pastors and worship leaders who have served mostly white congregations for advice on why and how to introduce and incorporate Black History month into Christian worship, outreach, nurture and witness. 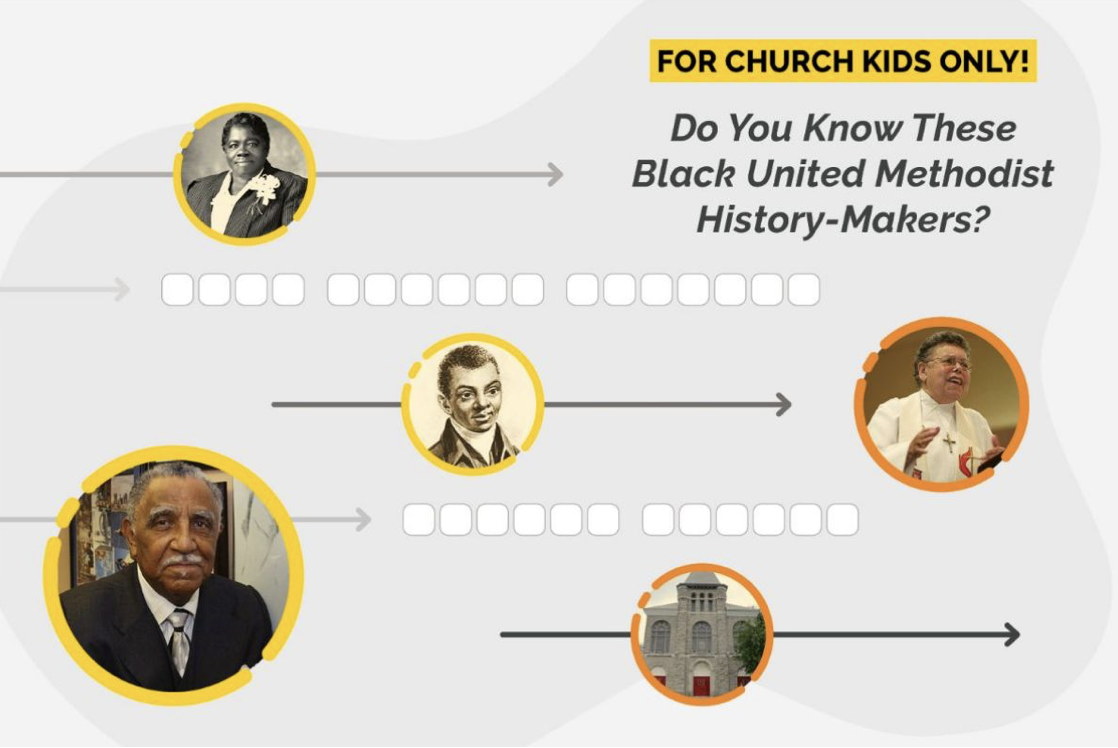 Bishop Sandra Steiner Ball commends to us this article, written by Bishop Forrest C. Stith, retired Bishop who served The United Methodist Church as Bishop in the Northeastern Jurisdiction as well as East Africa.

"We need a Black History month, not just to read about a minority group, but to intentionally discern ways of growing together in New Testament inclusiveness.

Today, the Council of Bishops represents the most diverse group of leaders in Christendom. The average Bishop, when elected, comes from a community and congregation which looks like, talks like, and thinks like him or her. Yet, they are assigned to a diverse constituency and expected to make decisions in a diverse setting. And through the power of the Holy Spirit, they do it well. This is a precious moment, and the Holy spirit of Pentecost may once again help us to tell the world about the Savior of the world.

Hopefully all of the above demonstrates that we not only need a Black Church History month but a commitment towards living together in the Shalom community of Jesus Christ. So,

The members of John Wesley United Methodist Church in historic downtown Lewisburg are like a family. 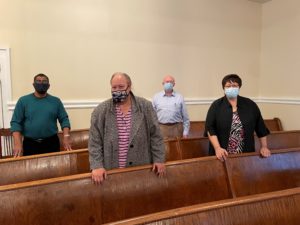 They laugh as they reminisce about Mrs. Cabell, an old teacher and church organist who would spy on them from the pipe organ’s mirror, then call them out at school come Monday morning for misbehaving in the pews.

They smile as they talk about how their “exchanging the peace” tradition — the hugging and greeting they did with one another and with any visitor during pre-Covid worship service — was a hard habit to break when the pandemic hit.

They shake their heads as they remember the days when they and the other kids from their old neighborhood, Gospel Hill, knew they’d better be back on their own side of town by 10 p.m., and that they could buy a hot meal in a brown paper sack — if they knew the right white people to meet at the back doors of the downtown restaurants just around the corner from their church.

They speak with a mixed sense of pride and horror as they point out what used to be a steep outdoor stairway, a slave entrance leading up to the gallery where some of today’s members imagine their ancestors may have learned many of the very same hymns their musically gifted choir leads today.

They sit on the same curved pews where the owners of those ancestors sang about love and grace, just on the other side of a church entry people of their color weren’t even allowed to use.

They tap their feet on 201-year-old creaky, narrow floorboards. If those boards could talk — and some believe they can, in a way — it might tell a story that no one walking on them today can even begin to understand. It’s a story where somehow, in the worst of circumstances, grace floated up into a slave gallery and planted a seed that grew generation after generation, so deeply rooted that not even a Civil War cannonball could shake its foundation.

Asbury United Methodist Church in Moorefield, WV originated as Asbury Methodist Episcopal Church in the 1870s. In November of 1887, the first building was situated on land that the trustees purchased. The congregation experienced spiritual growth through class meetings, prayer meetings, and revivals.

The trustees and members of Asbury worked with various ministers for the spiritual growth of the community despite being in a very old building. In October of 1921, Asbury’s leaders pledged to build a new place of worship on the same site. The old building was torn down and services were held in the Community Hall until the present building was partially completed.

The new church building was made possible by a lot of hard work, unselfish giving by Asbury members and large donations from other community members. The current building was dedicated in 1926. Nearly 50 years later, Asbury became a member of the West Virginia Conference, Romney District and Moorefield Charge. 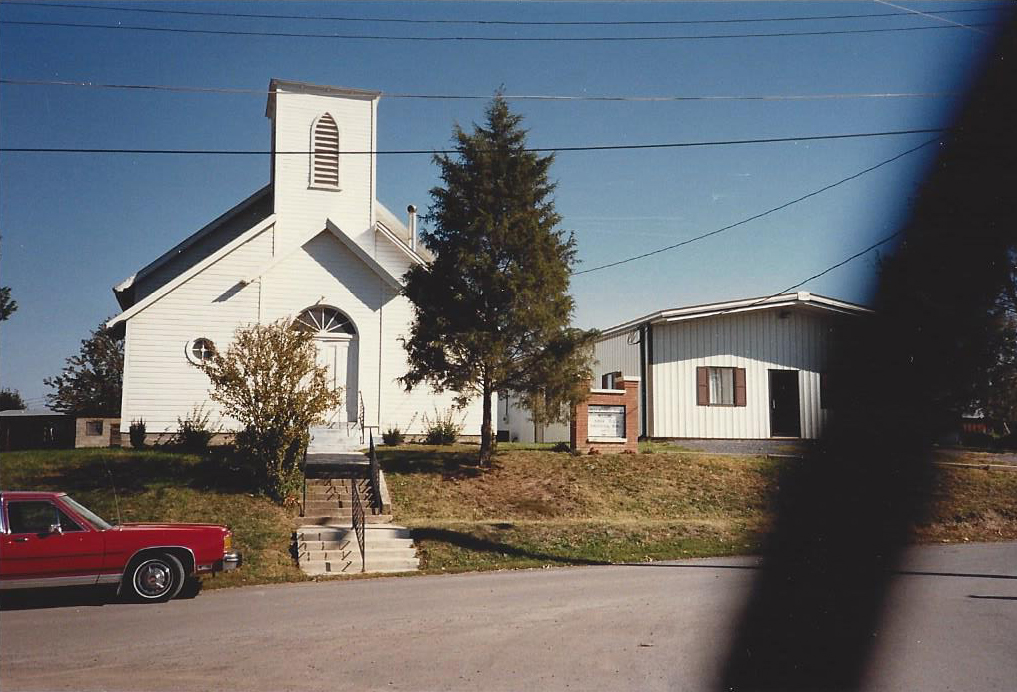 Follow this link to learn more about our
historically African-American churches.

Join us in celebrating our historically African American Churches with this video tribute. 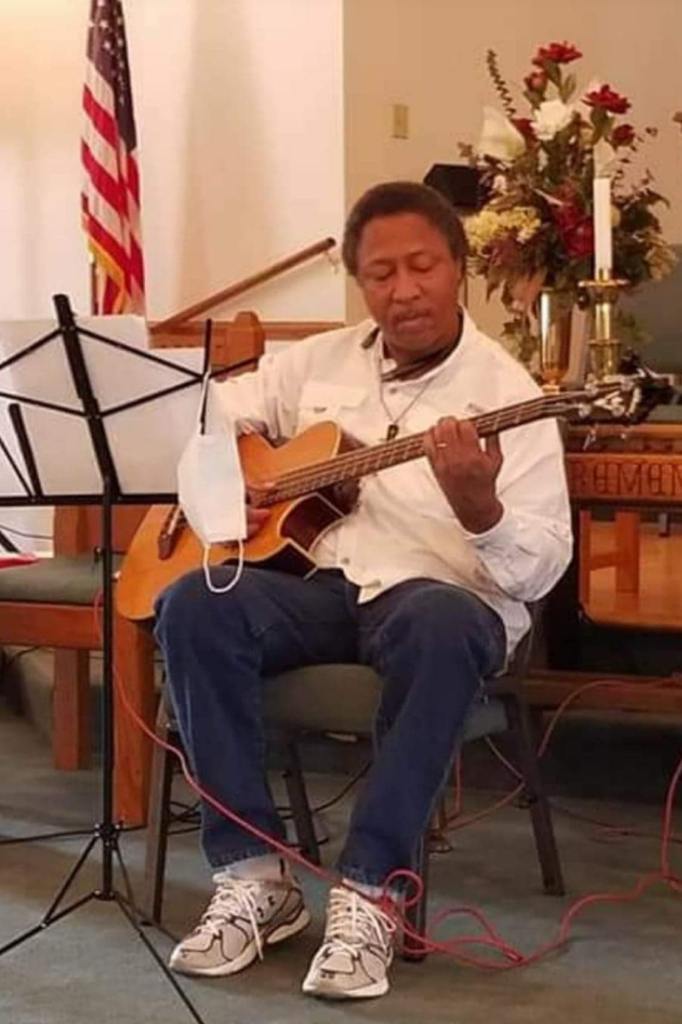 Anyone that attends church in the Parkersburg area most likely knows about the Logan Memorial UMC Praise Band. They have reached a certain level of fame around those parts for their Blues-infused renditions of classic hymns and spirituals and superb musicianship.

In 2017 that virtuosity was on full display at Wesley Chapel during Annual Conference, as the band shared their gifts during an evening worship service honoring the conference’s historically African-American churches. It was a worship service lauded by those in attendance.

Follow this link to read the rest of the story! 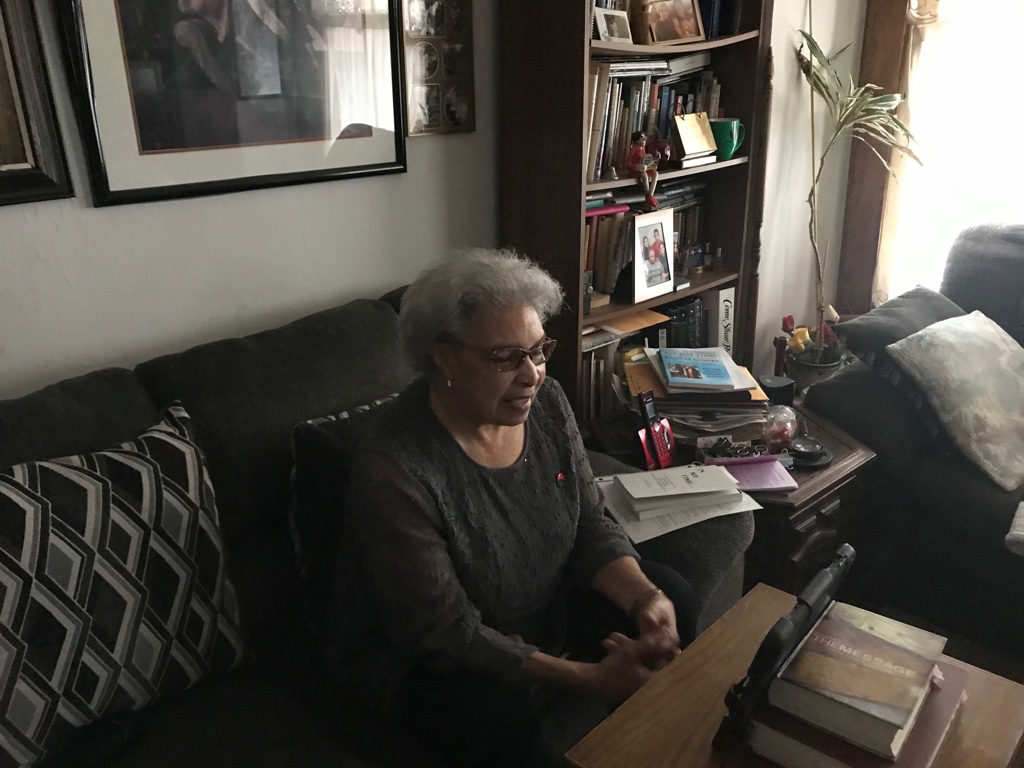 Walking through the airport in the immediate aftermath of the 1965 march from Selma to Alabama’s state capital of Montgomery to demand voting rights for that state’s African-American citizens – an event that left many marchers battered and bruised –  Rev. Dr. Martin Luther King, Jr. felt he caught a glimpse of beloved community. Seeing participants of the march from every ethnicity, gender, religious, and socioeconomic background crowded together awaiting flights back to their respective homes in harmony with one another – at one with each other, he would later write that “I knew I was seeing a microcosm of the mankind of the future in this moment of luminous and genuine brotherhood.”

Last February, in the immediate aftermath of an event that left Fairmont’s Trinity UMC faith community mentally, spiritually, and emotionally battered and bruised, Charlotte Meade feels like she too glimpsed a moment of genuine humanity at its finest when people from all parts of the community came together in solidarity to help with the cleanup effort.

(Follow this link to read A Celebration of Love)

Rev. Homer Davis: WVUMC mourns the loss of Rev. Davis on January 27, 2021. Rev. Davis was one of the first African-American District Superintendents appointed in the West Virginia Conference, serving from 1982-1988 under Bishop William Boyd Grove.

You can read more about Rev. Davis in this brief biography written in February 2017 by Felica Wooten Williams, PhD.

Katherine Johnson: When the movie "Hidden Figures" came out, it brought to the forefront the contributions of Katherine Johnson to the space program. She was not only a brilliant mind, but she was also a West Virginian and a United Methodist.

Read more about Katherine Johnson in this article by Rev. Deborah Coble, director of communications. 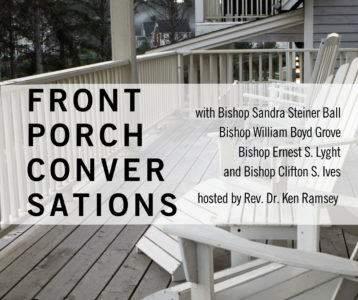 On behalf of West Virginia Bishops S. Clifton Ives, William Boyd Grove, Ernest Lyght, and Sandra Steiner Ball, as well as Rev. Dr. Ken Ramsey, who helped the bishops pull this project together, it is my honor to invite you into our Conversations from the Porch.

This conversation, separated into three video segments, was created out of a desire to invite individuals and congregations into a conversation that would raise our individual and collective awareness regarding racism and challenge us to the work we need to do within our own beings and in our communities to eliminate racism. 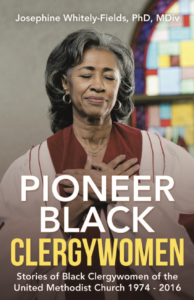 The book contains stories of Black clergywomen in the United Methodist Church from 1974 - 2016. Bishop Sandra hopes this book can be used as a resource for your further study as we all seek to share our stories and learn from each other. (Fun fact: Dr. Whitely-Fields was born in Caretta, and later moved to Bluefield until she was in the 9th grade!)

The project was partially funded by the General Board of Higher Education and Ministry, and the General Commission on Archives and History. Proceeds from the sale of the book will benefit scholarships for Black clergywomen. Image